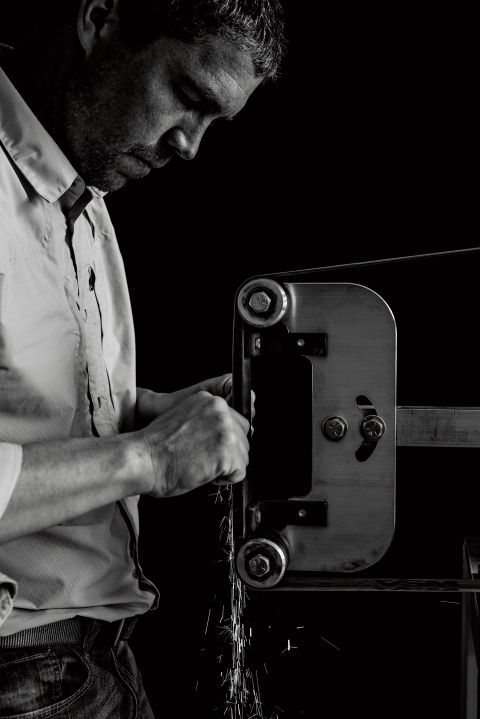 The Williams Knife Company's Edisto is unique among oyster knives: It's beautiful. Instead of a blade like a Phillips head and a plastic handle, the Edisto has an hourglass shape with a beveled steel blade attached by ram's horn to a wood-grain handle. "There's no reason it can't be elegant as well as functional," says founder Chris Williams. "Functional is the hard part. Pretty is the easy part." He's not kidding. The knife took Williams over a year in his shop on Johns Island, near Charleston, South Carolina, and fifty different prototypes to perfect. Williams learned knife-making from his grandfather. The first few he made for himself, then he started making knives for friends. Strangers saw those knives and requested their own, and soon Williams was able to quit his job in the financial sector and turn his hobby into a legitimate career. Six years in, business is so good that he's opening a second shop. Although the Edisto was designed specifically for the small shells of the oysters from South Carolina's Low Country, it'll work just as well on a couple dozen bluepoints. The blade's four sloped edges get into the tightest of shells, and the thickness of the middle retains lateral strength for spreading shells open. They're proven too. Williams says a customer bought a blade for his brother, who had consistently placed second in the amateur division of the National Oyster Shucking Contest. Since receiving an Edisto blade he's won the past three years in a row.—Cameron Johnson